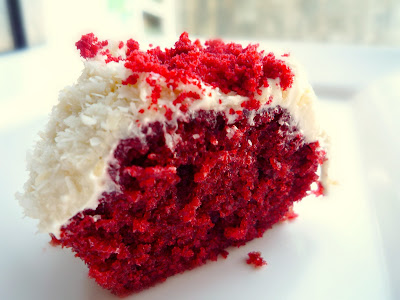 EAT BY COLORS
There’s a little bakery near where I live that makes the most amazing cupcakes. They all look gorgeous but only one stands out, The Red Velvet. It’s my all time favorite, which also happens to be their best selling cupcake. Every bakery seems to sell their own version of the red velvet cupcake. People are so passionate about it that there are even debates as to which one is the best. Why are people so in love and obsessed with it?

A study showed that colors not only stimulate certain moods but they can also influence how we think and behave. Red, green, yellow or white, whatever the color may be, they all affect our perception of food and taste in different ways.
Yellow represents energy, sunshine and happiness. It can help you focus and it certainly grabs your attention. Yellow is seen as an optimistic color and it also stimulates your appetite.
Green reminds us of nature and represents calmness. It is a relaxing and refreshing color. People associate green with health. In other cultures, dark green represents wealth and prosperity.
White reminds me of hospitals and nurses. I think hospitals are white because of the whole clean and sterile look it gives. It also represents purity and innocence.
Blue represents peace and tranquility just like the sky and the ocean but sometimes, depending on the hue, can also mean coldness, depression and sadness. It has the opposite reaction of Red. Blue suppresses the appetite so paint your room blue if you are on a diet!
Red is the color of love, excitement and desire. It is an intense, extreme and stimulating color. It makes your heart beat faster. It evokes confidence in women and makes them more attractive and desirable to men. =) Red is the color to paint if you run a restaurant.

Red stimulates your appetite. It makes you hungry for more. Maybe that is why I can never get enough of the Red Velvet cupcakes. There is just something about it that lures you in. Do you remember that scene in the movie, Serendipity, where Kate Beckinsale and John Cusack stood outside a hotel about to put their fate to the ultimate test? The Red Velvet Cake happens to be the signature dessert that was made famous by THAT hotel, The Waldorf Astoria Hotel in New York City in the 1920’s.

Since it was my first attempt at making red velvet cupcakes, I took my time in picking a recipe. I ended up trying two recipes since my first attempt failed. The cupcakes below are made with butter, following a recipe from a popular source that I found that was going around the net. Unfortunately, the first bite proved disappointingly dense and dry. It might have been due to my lack of baking skills though and not the recipe’s fault (lol). 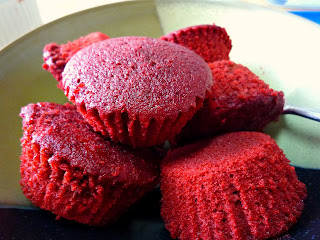 So I went searching for another recipe until I found a version that uses oil instead of butter . I was really happy with the results. These little babies were fluffy and moist with a tender crumb.

Here’s a cross-section comparison between the 2 cupcakes:

That lovely, dramatic, deep scarlet hue, the moist and delicious crumb with the slightest hint of cocoa taste topped with a creamy, rich, heavenly frosting make the red velvet cupcakes SO irresistible.

Try this recipe and see for yourself. Recipe from The Repressed Pastry Chef.

Preheat the oven to 350F degrees.
Line a 12-cupcake pan with cupcake liners and spray with non-stick spray.

Mix the milk and lemon juice or vinegar together in a glass. Let stand for 5 minutes. Use as you wish.

Whisk and sift the dry ingredients (cake flour, cocoa and salt) together in a bowl.

Beat the oil and sugar together in another bowl at medium speed until well blended. Beat in the eggs, one at a time, mixing well after each addition.

Decrease the speed to low. Add the red food coloring and mix well. Add the vanilla. Alternately add in the flour mixture with the buttermilk in two batches. Beat until just combined. Do not overbeat.

Put the baking soda in a dish. Stir in the vinegar. Add this to the batter slowly while beating. Beat for 10 seconds. 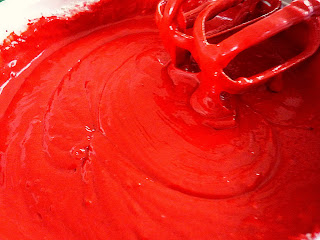 Divide batter among 12-cupcake pans, filling each about 2/3 full. Bake for 25-30 minutes, until a toothpick inserted comes out clean.

Beat the cream cheese and butter in a bowl over medium speed until smooth. Reduce the speed to low and add the powdered sugar, vanilla and salt. Increase the speed to high and beat until light and fluffy. Frost the cooled cupcakes and top with white sprinkles. (I didn’t have any so I used dessicated coconut instead) 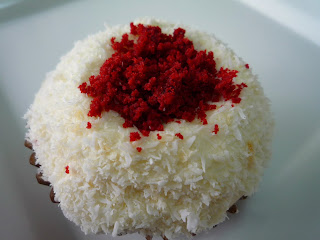 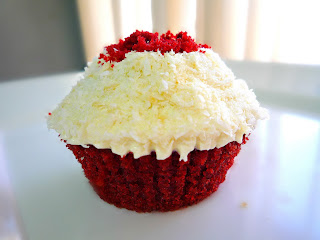 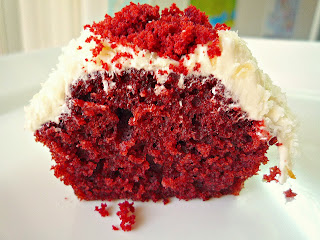